Want to grab that purchase and go? You’re not alone. Today more than ever, people are living an increasingly digital – and mobile – life and they expect their ability to pay for their needs and wants to match that same “always on” mindset, according to social media conversations identified in the 2019 edition of the Mastercard Digital Payments Study.

Mobile payments represented more than 27 percent of the total social media conversation around payments, with total mentions increasing 20 percent over the prior year. Mentions of mobile wallets specifically more than doubled since 2017.

Now in its sixth year, the study, developed in partnership with PRIME Research, analyzed more than 3.3 million conversations from the past year across several social media channels, including Twitter, Facebook, Instagram and Weibo.

“On-demand isn’t just an expectation for cable and content provider; it’s a reality for how people say they want to shop and pay every day,” said Rose Beaumont, senior vice president of European communications and sales enablement at Mastercard. “In this year’s study, we see just how much these fast, convenient and secure ways to pay are being embraced across all markets. And, it points to the continued interest and demand for years to come.”

People are looking to newer technologies to have an impact on their lives. In the past year alone, such mentions on social media increased 30 percent since the last study. Today, nearly 20 percent of all mobile commerce payments are focused on contactless payments and mobile wallets. Beyond these primary focus areas, consumers are interested in how artificial intelligence, QR payments and wearable payments will impact their lives.

Overall, people are increasingly positive toward these newer technologies. Virtually all (95 percent) mobile wallet conversations were favorable, with 30 percent of posts praising the speed, efficiency and simplicity of the current products.

The adoption of mobile payments is seen in markets across Asia and Africa. India was the most dominant market – 30 percent – in discussing the use and potential of mobile wallets, particularly around public transit and the use of QR-based payments, led by specific references to MasterpassQR and PaytmQR in India. The U.S. was a distant second in consumer’s discussions on mobile wallets (10 percent). 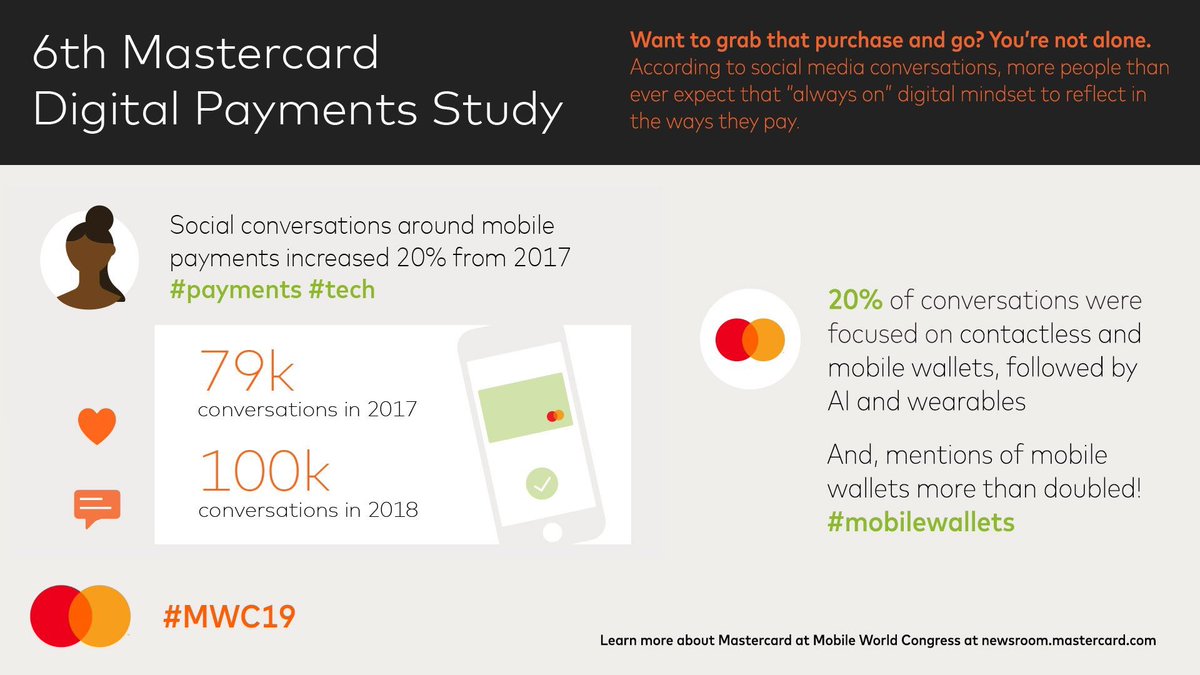 Primed for Action with Peace of Mind

Among the conversations analyzed, consumers clearly continued to be focused on the security of their money and their data as a foundational requirement. In their posts,    people recognize the value of new technologies on delivering this peace of mind across mobile payments.

Looking at the newer technologies:

While breaking news around data breaches drove one-fifth of data-related conversations, another 13 percent of these conversations noted the potential of digital security technologies, including blockchain, tokenization and biometrics.

About Mastercard at MWC:

Mastercard will have a stand, located at Hall5 Stand5 D61, at MWC Barcelona with a number of key execs available for media interviews – for more information please visit here for images, press releases and information or look at @MastercardNews throughout 25th – 28th February 2019.

Mastercard, in partnership with PRIME Research, conducted its sixth Digital Payments Study, designed to identify expanding conversations on new ways to pay. More than 3.3 million public social media posts were analyzed over a 12-month period (Jan 1st, 2018 – Dec 31st, 2018). These posts were made on Twitter, Facebook, Instagram, Forums, Google+, YouTube, Vkontakte and Weibo in nearly 190 markets across the globe. The resulting report reflects insights into new mobile payments product and category trends across regions and countries.

Mastercard (NYSE: MA), www.mastercard.com, is a technology company in the global payments industry. Our global payments processing network connects consumers, financial institutions, merchants, governments and businesses in more than 210 countries and territories. Mastercard products and solutions make everyday commerce activities - such as shopping, traveling, running a business and managing finances - easier, more secure and more efficient for everyone. Follow us on Twitter @MastercardNews, join the discussion on the Beyond the Transaction Blog and subscribe for the latest news on the Engagement Bureau.